In October last year, we reported on the Motorhome and Caravan Show 2014. Just four months later, the NEC is once again brimming with caravans, motorhomes, trailer tents, folding caravans / campers and just about every conceivable extra and accessory on the market today.

10 o’clock this morning saw the opening of the doors at the Caravan, Camping & Motorhome Show with the intial tape cutting and talk being done jointly by TV presenters Matt Baker and Ben Fogle at 10.30. 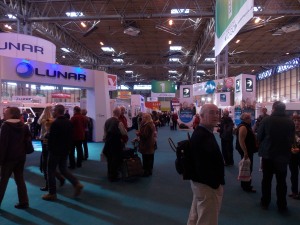 Around 80,000 Visitors Are Expected To Visit The Show Between 17-22 February

As this is the sister show to the Motorhome and Caravan Show, all statistics and information stated in our October Review Of That Show remain valid.

Feel free to check them out by taking another look, if you’re into your numbers.

As of this morning, a further press release has been issued, detailing more recent information, which makes for interesting reading:

For both touring caravans and motorhomes, October was the busiest month, with sales of the former up by 22% and registrations of the latter up by 18%, compared with October 2013.

According to NCC data, in total, 21,379 new touring caravans were sold in 2014, with 8,733 new motorhomes registered with the DVLA during the same period. Anecdotal evidence suggests that buyers are increasingly younger families, and the NCC is working with the Caravan Club and The Camping and Caravanning Club on a new industry promotional campaign, freedomtogo.co.uk to attract new entrants to the market.

Camping remains a British manufacturing success story. More than 95% of touring caravans in the UK are made here, and approximately 60% in the case of motorhomes. Over £2.4 billion was spent on caravan holidays across Great Britain, with more than 51 million nights spent in caravans each year. The industry as a whole contributes more than £6 billion a year to the UK economy. 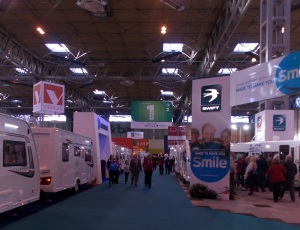 Of course, there are bound to be a lot of similarities to the October show, however, the Spring show takes part in a different area of the NEC, filling only the 5 larger halls, as opposed to 11 smaller ones in Autumn.

This meant, in many ways, that the show was even more organised than before, insofar as each particular aspect of the industry was grouped together in one or more halls, even more so than it was in October.

Obviously, there is bound to be a degree of overlap, but the main halls can be summarised as follows:

Generally speaking, you tend to find that the main exhibitors are in the centre of each hall, with a large number of smaller stands dotted around the outside, selling all manner of items and services, both camping and non camping.

In addition to all of the ‘standard’ exhibitors, there is the usual array of attractions and events, including;

Celebrity Guests & Experts. The Experts’ Theatre offers an array of live shows covering many aspects of the Motorhome and Caravan industry. There will be a packed timetable of events including live cookery shows, product launches and Q & A sessions with leading experts in the field. Checkout the timetable using the link above.

Towing Experience. Free one to one sessions are being offered by The Camping and Caravanning Club where you can learn to tow a touring caravan safely. This session will help you whether you’re a newcomer or an old hand. The specially trained tutors are all experts and will show you how to get the most out of your vehicle and your travels.

Motorhome Manoeuvring. Become a motor caravan manoeuvring master! The Caravan Club is offering free expert tuition at the show. These sessions will improve your skills and help build confidence. You’ll be driving a motorhome alongside a fully qualified Caravan Club instructor.

Various other attractions, including dog agility, campers cookbook and on site camp site. To get an idea of some of the things available, take a look at the Show’s Promotional Video.

As previously, ticket prices are £8 in advance, and £10 on the door (£7 and £9, respectively for senior citizens). Children of 15 and under go free. This means that the basic cost of a day out for a family of four can be as little as £16 for two adults and two children, including parking, show guide etc. Obviously, the price ramps up pretty quickly if you start to venture anywhere near the huge selection of on site eateries dotted around the various halls.

Queues did seem to be quite a bit longer, both in terms of number of people and time spent waiting than in October, but I think this is due to the different positioning of the show within the NEC. The whole Spring show seems to be much more compact, and there appeared to be only a couple of sets of ticket kiosks this time, albeit it with quite a few in each one. As usual, though, everything seemed to be moving very smoothly, and the shuttle buses were as efficient as ever. I walked straight onto one, on arrival, and was waiting for no more than 10 minutes when returning to my car. 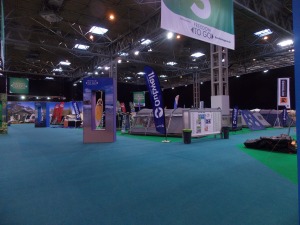 Hall 5 Was The Home Of All Tents, Trailer Tents And Folding Campers

Each hall was absolutely rammed with caravans, motorhomes, campers and tents, as well as awnings and other accessories. It’s incredible to think there are even that many models on the market, let alone all in one place.

If you did want to take a look at every model in show, you would struggle to even come close to doing it all in one day, which is why many people chose to take advantage of the show’s own camp site, to turn the experience into a two day plus affair.

Everything I said about the October show still applies. The halls and layout may be different, but this is the sister show to the October one, and, hence, has been organised in the same way, and, presumably, largely, by the same people. Definitely worth a day out, even if you are happy with your current setup, and simply want to peruse the extensive selection of accessories and equipment.

The Pennine Outdoor Leisure Stand, With All 4 Models On Display

Obviously, my main focus of attention was the folding camper section of the show, however, as I am now compiling the Folding Camper & Trailer Tent Definitive Guide, my interest, this year, extended out, to include the trailer tents on display, as well.

Most of the key players were there, including Pennine and Opus, on the folding camper front, and Trigano, Camp-let, Raclet and Campmaster representing the trailer tent fraternity.

Noticeable by their absence were any of the Jamet models, however, these were replaced by a couple of the Holtkampa models, presented by Black Country Caravans. In a sister article to this one, I will be reviewing each of the folding camper and trailer tent models, individually, however, for now, I will just summarise the basics.

Trailer Tents Etc Are All Together In Hall 5

The folding camper & trailer tent section of the show comprised just five stands, all adjacent to each other in Hall 5.

For some reason, folding camper manufacturer Opus is not mentioned anywhere in the Show Guide, or show web site, but they could be found tucked away on part of the large PJ Accessories stand, number 5345, if anyone wants to check out this particular model.

The remaining five stands were as follows:

5020 – Black Country Caravans, with their HoltKampa models, the Cocoon Aero and Kyte, and their Cabanon offerings, the Manga and the Mercury.

5122 – Pennine Outdoor Leisure, with their four models, the Pennine Fiesta and Pathfinder, and the Conway Countryman and Crusader.

5124 – Camperlands, of Manchester, with the Camp-Let range, as well as their own Campmaster Air, as featured in our October show review.

All of these will be looked at, in detail, in our next article. 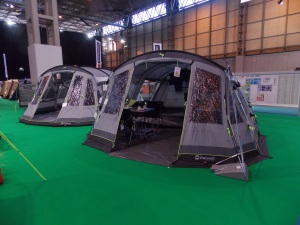 Hall 5 Is Mostly Comprised Of a Pretty Decent Array of Tents, Of All Shapes & Sizes

The rest of Hall 5 is, basically, comprised of tents and camping accessories. It is very clear that this show is geared very much towards the caravan and motorhome section of the leisure market.

There are three and a half large halls, filled with these, and another half of Hall 4, dedicated to holiday homes and lodges.

The tents, trailer tents and folding camper section of the show was restricted to Hall 5, and it was quite clear, as a number of people remarked at the time; that part of the Hall had been partitioned off, using black drapes to contain the exhibitors into a smaller area, so as not to make it look empty.

That said, there is still loads to keep you and your family occupied for a full day, even if you aren’t looking for your next caravan or motorhome (if you are, then I would allow a couple of days, at least). There’s still a larger array of tents and accessories than you are likely to see anywhere else, and still plenty to see and do for the haters of the ‘tin tent’.

The ‘And Now For Something Completely Different’ Award 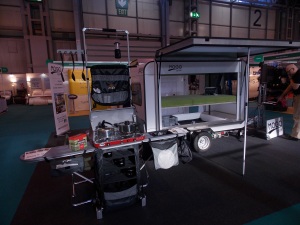 In October, I gave a special mention to the Campmaster Air, which I thought was a cracking little lightweight trailer tent, and a totally different twist on the norm.

At this show, I came across another interesting little design concept.

Not sure if it’s entirely practical or not, but, as a multi purpose trailer, that you can also camp out in, it’s quite cool, especially if you have bikes etc as well.

The model in question is the Mogo Freedom, a hard sided trailer, with integral double bed that lifts up to allow for significant storage underneath. The sides lift up and can be used with two awning annexes to create additional space. Worth a look, if only for the curiosity factor; www.mogofreedom.com.

Although All Squashed Into Hall 5, There’s Plenty To Keep The Camping Fans Happy

Considering the fact that the Spring Show includes the word ‘Camping’ whereas the Autumn show doesn’t I would probably have expected to see a little more in the way of actual tents at the show, but there were, still, plenty there, and the huge wealth of events, attractions, campsites, accessories and equipment are more than enough to keep most tenters entertained.

As ever, the caravan and motorhome enthusiasts are incredibly well catered for, and you will need to plan your trip well, to get the most out of a single day there, as there’s just so much to see and do.

There’s also a huge selection of food and drink available throughout the show, as well as camping related family entertainment for when the constant conveyor belt of caravan interiors gets a little too much.

Much of Hall 4 is also comprised of the ‘Campsites & Destinations’ section of the show, which includes an excellent selection of camp sites, travel companies etc, many of them outside of the UK, for those of you considering venturing a little further afield, or just looking for somewhere different within the UK.

Everything else camping is catered for as well, including clothing, cooking equipment, cleaning products, satellite TV, furniture, tow cars, solar panels, the list is endless. If you’re still undecided, I strongly recommend you give it a go. It’s excellent value, and a real full days entertainment, if you have any interest in camping or caravanning whatsoever, plus it kills a day or two of the half term break, for those of us who have the week off.

MD and owner of the Woodhurst Group, including Praxis Accountancy Limited and Blue Sky Recreation Limited. Also Commercial Director of The Sky visor Group
View all posts by Alan Young →
This entry was posted in News And Information and tagged 2015, Caravan Camping Motorhome Show, NEC. Bookmark the permalink.